Additional assessments will help evaluate relationships between delirium, POCD, and other geriatric syndromes. J Am Geriatr Soc , National Comprehensive Cancer Network guidelines recommend evaluation and management by multidisciplinary teams with experience in sarcoma. Our aim was to determine an appropriate hospital volume threshold for the treatment of RPS. Multivariable modeling with restricted cubic splines was employed to examine the association between hospital volume and survival and identify possible hospital volume threshold.

Median annual volume was two cases per year. Compared to low-volume, high-volume hospitals more often had patients with high-grade and larger tumors. Adjusted day mortality was significantly lower in high- vs. With adjustment, treatment in high- vs. Hospital volume may be a surrogate for the infrastructure and support necessary for the optimal management of these complex malignancies. Published rates after minimally invasive PD are comparable or superior to open, but data are limited to high-volume, single-institution series. This study aimed to determine national outcomes.


We hypothesized nationwide infections would be reduced with a minimally invasive approach. Linear regression determined correlation of known parameters with infection rate. Demographic and clinical features at the time of diagnosis were evaluated for all patients. Subjects who underwent surgical resection were identified, and logistic regression was used to identify variables associated with resection. A Cox proportional hazards model was developed to identify factors associated with survival. The mean age at diagnosis was 63 years, with tumors occurring more frequently in women Tumors in the head of the pancreas were most common The mean size was 7.

Only patients OS and relative survival were assessed using Cox proportional hazard regression analyses before and after propensity score adjustments. Lymphangiomas are most commonly described as a small painless mass in the neck or a vesicular rash in an infant patient. Ninety per cent of cases are diagnosed before the age of 2. Treatment usually involves surgical resection. Intra-abdominal lymphangiomas and mesenteric lymphangiomas, as described in our case report, represent a rare pathology.

The exact prevalence of this condition is unclear but it has been suggested in the literature that there have been as few as cases since the 16th century. The clinical presentation is usually subacute and diagnosis made incidentally during a workup of chronic gastrointestinal symptoms.

Acute abdominal symptoms, as in our case presentation, are unusual but may be explained by the mass effect of a large intra-abdominal lesion. Cross-sectional imaging is key in preoperative workup and operative planning. Complete surgical resection is recommended and curative in the majority of cases with a low risk of local recurrence. Because it commonly metastasizes via lymphatics, portal lymphadenectomy should be included in oncologic resections.

This study aimed to compare the oncologic equivalence of the laparoscopic versus open technique by evaluating lymph node LN yield.

Then, long-term survival between groups was evaluated using the Kaplan-Meier KM method with comparisons based on the log-rank test. Multiple variables were analyzed between two groups. Black patients were significantly more likely 7. Management of RPS is complex and requires multidisciplinary, tailored treatment strategies at all stages, but especially in the context of metastatic or multifocal recurrent disease.

Due to the rarity and heterogeneity of this family of diseases, the literature to guide management is limited. The TARPSWG has compiled the available evidence surrounding metastatic and multifocally recurrent RPS along with expert opinion in an iterative process to generate a consensus document regarding the complex management of this disease. The objective of this document is to guide sarcoma specialists from all disciplines in the diagnosis and treatment of multifocal recurrent or metastatic RPS. Results: All aspects of patient assessment, diagnostic processes, local and systemic treatments, and palliation are reviewed in this document, and consensus recommendations provided accordingly.

Recommendations were guided by available evidence, in conjunction with expert opinion where evidence was lacking. Conclusions: This consensus document combines the available literature regarding the management of multifocally recurrent or metastastic RPS with the practical expertise of high-volume sarcoma centers from multiple countries. It is designed as a tool for decision making in the complex multidisciplinary management of this condition and is expected to standardize management across centers, thereby ensuring that patients receive the highest quality care.

Historically, primary tumor resection was not thought to confer any survival benefit. Although high-level data exist guiding treatment of metastatic GC for patients in the East, no such data exist for Western patients despite inherent ethnic differences in GC biology.

Patients were classified into those who underwent primary tumor resection and chemotherapy PTRaC and those who received chemotherapy only. Groups were propensity score matched, and survival was compared using advanced statistical modeling. After multivariable adjustment, patients who underwent PTRaC had a significantly better overall survival OS than patients who received systemic therapy only HR, 0.

Despite high survival rates, severe complications may occur even in early stages due to the anatomic location of the primary site and the desmoplastic reaction.

Surgery plays a central role in the management of patients with si-NENs. Excision of locoregional disease along with extensive lymph node dissection should be performed in fit patients, even in the presence of metastases. Multimodality treatment of liver metastases includes hepatectomy, ablative techniques and liver transplantation. Hormone therapy with somatostatine analogs is of high importance for symptomatic control; special caution should be exercised both pre- and intra-operatively.

A multidisciplinary approach is essential in order to provide personalized therapeutics for patients with si-NENs. Clinical research and specialization in this field should be further encouraged. Appendiceal neuroendocrine neoplasms ANENs comprise rare tumors of the appendix, mainly affecting young populations and characterized by a rather favorable prognosis. The aim of this review was to summarize the current knowledge on these neoplasms, focusing on the management and follow-up of such patients, which still remain under debate.

ANENs account for 0. The histopathological diagnosis includes the immunohistochemical profile of the tumor in regard to synaptophysin and chromogranin A, as well as the Ki index. The surgical management of ANENs is either simple appendectomy or a more extensive oncological operation including right hemicolectomy. This depends on the stage and the presence of risk factors suggesting a more aggressive disease, such as the exact location, mesoappendiceal or lymphovascular invasion, and the proliferative rate of the tumor.

Despite their indolent course, ANENs may relapse. Patients were classified by surgical approach MI vs. Groups were propensity score matched using a nearest neighbor algorithm, and outcomes were compared. Survival was estimated using the Kaplan-Meier method. Following adjustment with propensity matching, all baseline characteristics were highly similar between patients in each treatment group. Between propensity-matched groups, MI gastrectomy patients had similar rates of margin-negative resections 91 vs. 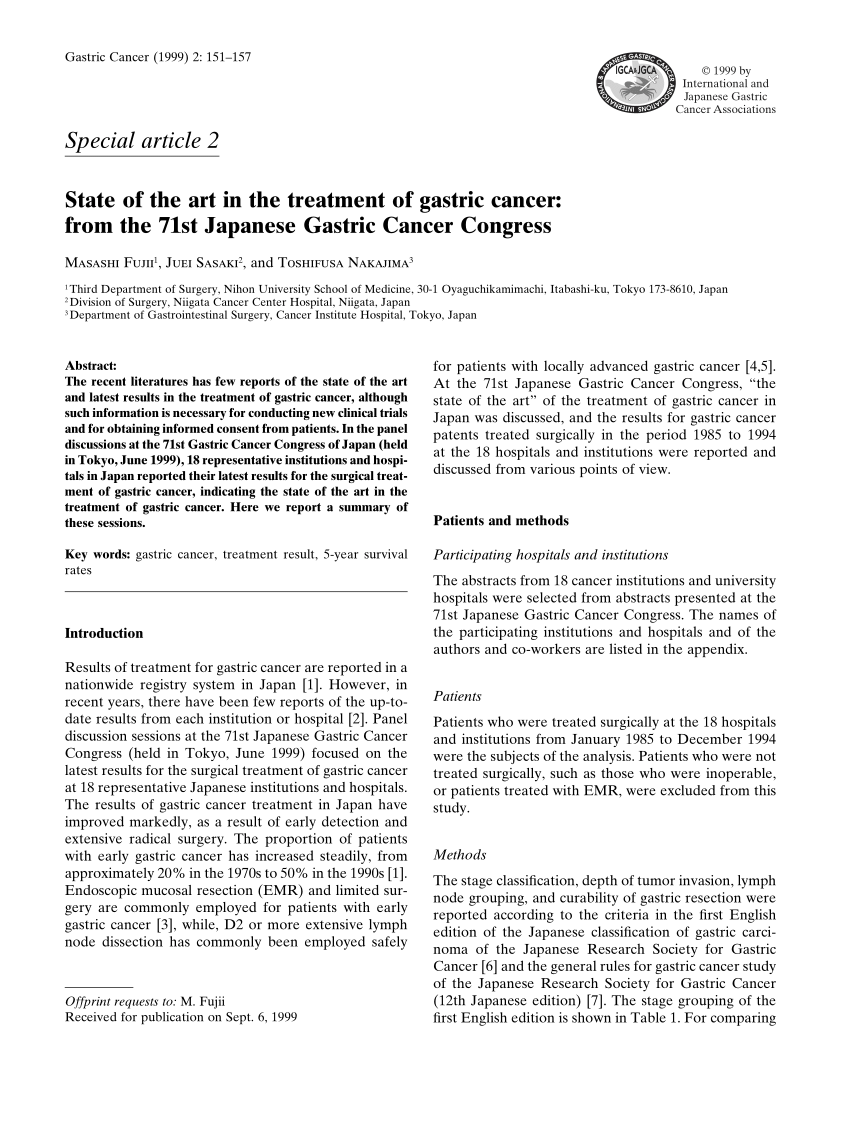